Home to every Hunter and Forager,
Every Hero and Coward,
Every Creator and Destroyer,
Every King and Peasant,
Every Inventor and Explorer,
Every Mother, Father and Child,
Every teacher of Morals,
Every Corrupt politician,
Every Superstar, Saint and Sinner,
Aggregate of our Joy and Suffering,
This tiny mote of dust,
Suspended in a sunbeam,
This is Home, This is Us!


Beautiful words by Carl Sagan.. Everyone you love, Everyone you know, Everyone you have ever heard of, Every human being who ever was, has completed his existence on this planet. The planet, which is the only home Humanity has known in its history.

Our Home - The Blue Planet 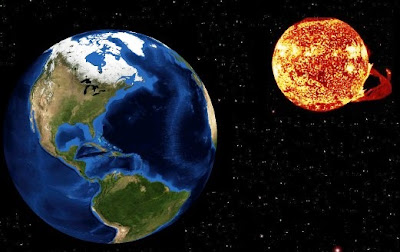 In the post {Heaven at the North Pole?}, we saw a brief description of the containing landmass - Jambudvipa.  Geographical descriptions in Hindu, Buddhist and Jain texts repeatedly throw up this well-defined yet not-so-well-recognized term.

Different scholars consider it variously as either the 'Indian sub-continent' or the 'Asian continent'. However, as we shall see, none of them come even close to the TRUTH!! Let me share some of the important scriptural references here with you: 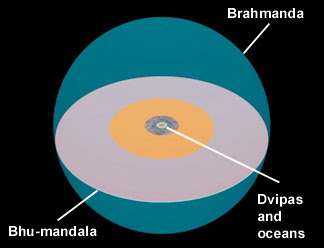 From the above descriptions, it would be clear that this landmass DOES NOT refer to India or even Asia.. The references in fact indicate Jambudvipa to be NOT a small portion of our planet, but the ENTIRE Planet itself!! 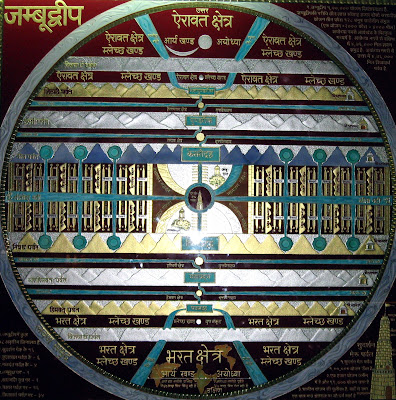 Alongwith Jambu-dweep, the scriptures describe various other Islands which some scholars tend to confuse with the different islands of our planet and hence get flabbergasted. Sitting at the southernmost tip of the island of Lanka right now, I can understand this is definitely NOT the case.

The staggering dimensions of these so called 'Islands' should be indication enough to negate that possibility completely. Moreover, these Dvipas are located around the central landmass of Jambudvipa in a concentric fashion which suggests each of them revolving in circular orbits.

Arrangement of Dvipas in a circular fashion 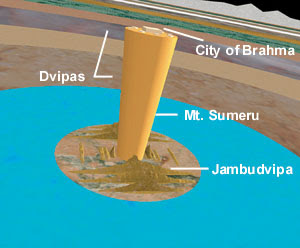 I believe the Dvipas refer to the different planetary systems of the Madhya Loka that are inhabited by Humans and is perhaps the FIRST reference in World literature to Humanoid races inhabiting MORE than ONE planet!! This interpretation seems to me most likely, especially if the planets being talked about exist in Parallel dimensions. However, for our current study, we shall focus only on the central island, and leave the analysis of others for a subsequent post.

Repeatedly, the entire landmass of Jambu-dvipa is described as a continuous stretch of land subdivided into different continents by means of various mountain ranges with each of these divisions being governed by the 9 sons of Emperor Agnidhra, the grandson of Adam/Manu.

This, however, is clearly NOT the current state of affairs! The present landmasses on Earth are quite spread out and no where are they close to forming a global island. Besides, instead of Mountain ranges, it is the water bodies that separate them from each other.

So is the legend of this Global-Island a POETIC reference or does it refer to an ACTUAL hither-to-undeciphered fact??

Even preliminary research on this topic shows, that there indeed was a time in the history of our planet when the ENTIRE land on Earth was joined to form a SINGLE landmass! In Geology, such an entity is called a Super-continent and quite suitably, the Scientists have labeled it as Pangea. 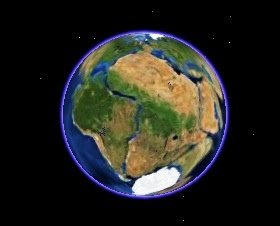 Could it be, that the scriptural reference of Jambudweep, actually originated in a time when the Entire Earth was ONE whole Continent and not broken up into different landmasses!?!

The descriptions in scriptures clearly define an island of gigantic proportions covering this entire globe and it is more than likely that they refer to one of the super-continents that have existed in our pre-history! Let us try to understand, how in the World (pardon the pun) could the ENTIRE World have been joined as one.

Jambudvipa as a Super-continent

It is a scientifically documented fact that Earth's Crust floats on the hot, molten layer called Magma. The solid crust not only moves on top of the fluid layer but is also broken into separate pieces called Plates that move relative to each other. This movement is referred to as Plate-tectonics. 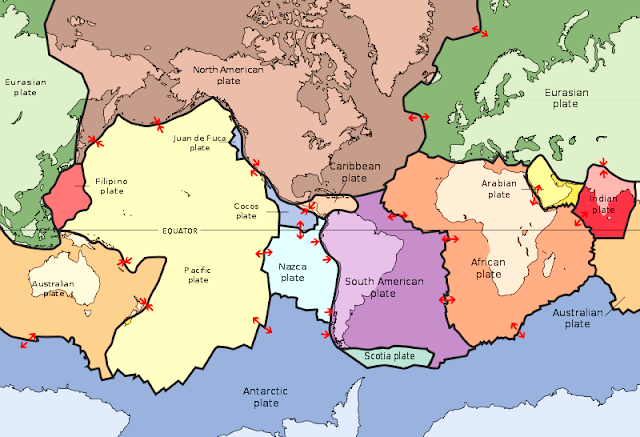 Plate-tectonics can be used to explain the formation of many geological features on our planet right from the highest mountain ranges of Himalayas (which came up when the Indian plate collided with the Eurasian plate!!!), to the deepest ocean formations like the Marina trench.

Scientists have observed that the different plates are in CONTINUOUS motion with respect to each other, and plotting their course in the past, they have realized that at some point of time, these plates were all TOGETHER giving rise to our Super-continents!!

Observe changing positions with focus on the Indian plate

Moreover, this process is still going on and our Earth is going to look quite different in the future as well!

Earth's crust changing shape over the past and future!

The presence of these super-continents has also been proved using Fossil studies which shows a remarkable similarity amongst the distribution of wild-life in the southern continents. 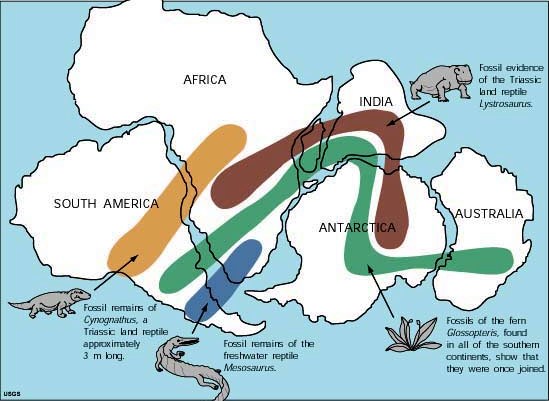 The movement of these Plates has resulted in formation and disintegration of Super-continents in the 4.5 Billion year old history of our Planet MORE than ONCE!

The earliest known super-continent on our planet was formed 3.1 Billion Years Ago (!) and is called the Vaalbara. Since its break-up, a series of global islands have taken shape and disintegrated and the most important of these have been the Kenorland, Columbia, Rodinia and the most recent one, the Pangaea.

Arrangement of current continents in past Super-continents 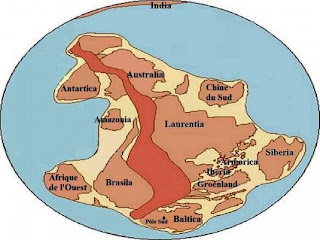 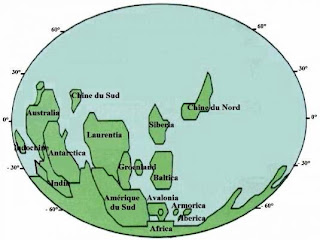 Now, which of these is the Earth-Island of our texts, would have to be ascertained through deeper study of the scriptures, (or maybe even Time-Travel!!). For our current purpose, it should be sufficient to understand that Jambudweep refers to one of these Global Islands, perhaps like the Pangea.

Interestingly, this movement of tectonic-plates might have a parallel in mythology as well!!


It is interesting to note, that Hindu texts talk about the Earth (land) being situated on the back of a Turtle which, to me, seems an allegorical representation of the slowly sliding Earth plates!!!

Earth plate on the back of a Cosmic Turtle 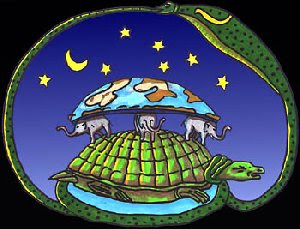 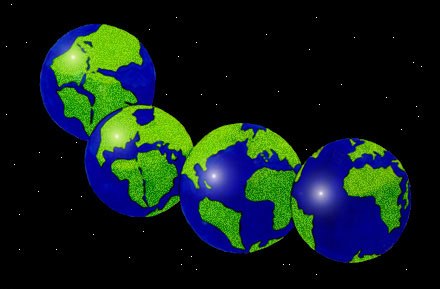 Shatapatha Brahman identifies Earth as the lower shell, the atmosphere as the body and the vault of heaven as the upper shell of this Cosmic Turtle. Also, the serpent around the world is similar to the  one in Norse mythology that binds Midgard or middle-earth together. Similar concepts can also be found in Chinese, as well as Native American mythology. In fact the Mayan, Incan and Navajo descriptions of the Earth closely mirror the descriptions of Jambu-dvip from ancient Indian texts!﻿


Numerous other scriptures also give matching descriptions which, due to lack of correct understanding, were ridiculed by early European Historians. There's nothing ridiculous about the descriptions from ancient scriptures; we only need the right INSIGHT to decipher their profound meaning!

Jambu-dvipa Map according to Native American and Indian texts 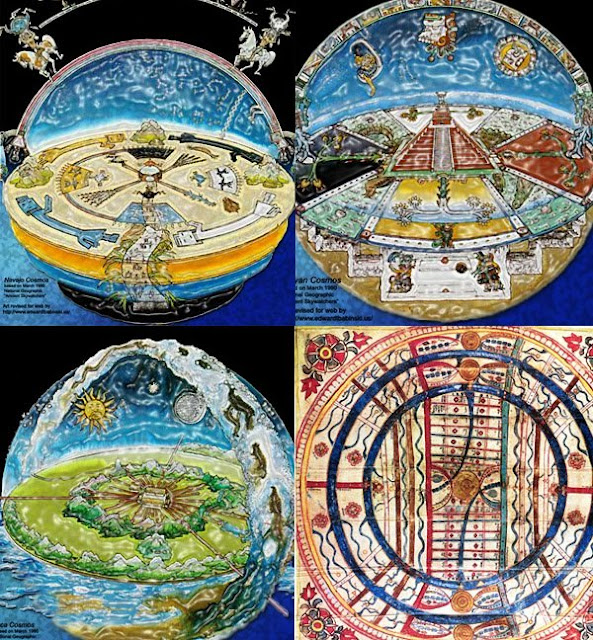 This might be a reflection of beliefs passed on by oral tradition remembering the common origins of mankind or perhaps the wisdom passed on by Gods, or who knows, maybe even Aliens ;o)

Ancient texts describe 9 divisions of Jambu-dweep with precise locations ascribed to each of them. Also, bang in the center of this global-landmass is an enormous mountain called Meru.

Now, we have already discussed Mount Meru earlier {Check - Heaven at the North Pole} and have understood that it actually refers to the Earth's Axis. Also, in the previous post {Check - Naming a Nation}, we have identified and studied the description of our own Indian sub-continent.

On the basis of the last TWO posts, there are at least TWO things we can definitely state:

To me, the descriptions of Jambudvipa seem like a Polar projection i.e. a view of the Earth as seen from above the North Pole. We will therefore try to extrapolate the continents based on these three reference points.

Polar Projection of the present landmass 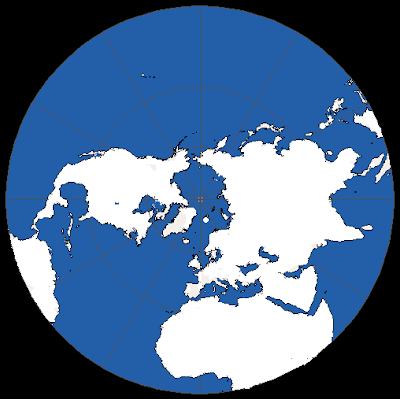 Let us first understand the exact arrangement of continents in this Super-continent. Broadly, the four landmasses of Bharat, Ketumal, Bhadrashva and Kuru are placed in the four directions, like petals of a lotus flower around the central pericarp of Meru (and Ilavrit Varsha). Let's see how it appears diagramatically.

Going Southwards from Meru, we first come across Kimpurush-varsha followed by Hari-varsha and finally Bharat-varsh which is the southernmost continent. In the North, Ramyak is the first landmass followed by Hiranyamay and Uttarkuru divisions (As a corollary, we get Kuru Varsha on the exact opposite side of India when mapped on the globe).

Towards the East is Bhadrashva which would today lie somewhere in the Pacific Ocean and towards the West is Ketumal which would probably be submerged under the Atlantic Ocean of today. The image below has been taken from Hitxp forum and maps these descriptions onto the current World Geography. 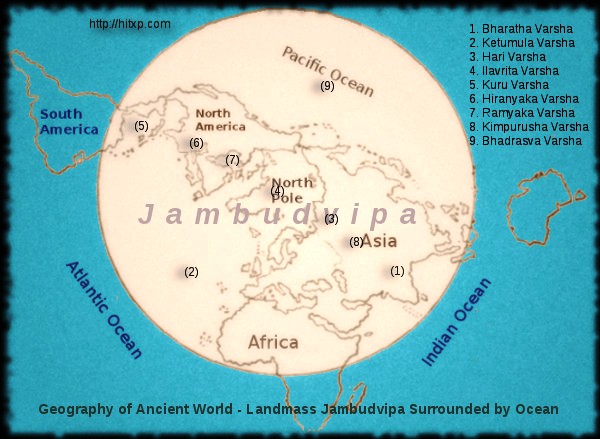 
We should understand that owing to different arrangement of continents, most of Southern America, Afric and Australia were either located very different to their current positions OR probably submerged under water!

If this theory is correct, the reference to this Super-continent points to existence of an extremely ancient civilization that has retained the memories of a Global-Island or at the very least had the technical know-how to find out this pre-historic description ages before modern science!!

Repatedly, my research throws up such astonishing facts that I am forced to think twice before writing each article! But then, I think it is my duty to share my findings with whoever is interested in reading about such topics and let them form their own opinions. There is NO other agenda for me but to find out the HIDDEN science in the enormous religious data available in our country. Not only Hindu, even Jain and Buddhist texts are full of beautiful insights into the mysteries of the Universe.

Coming back to the mystery of Jambudvipa, most geologists claim that this is a cyclical process and in about 250 Million Years from now, all the continents would AGAIN come together to form a super-continent called the Pangea Proxima.

Many models have tried to predict the future shape of this global-island but I would like to propose a new and more attractive one :o) 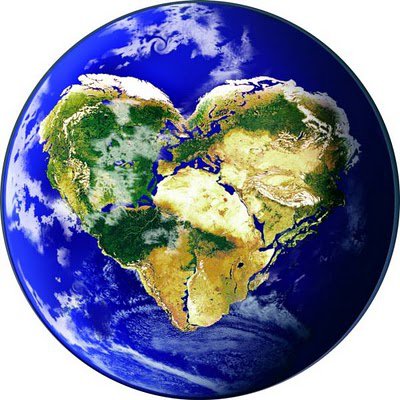 Just as the Jambu-dweep has split over the eons, so has the Human species and we are today divided into innumerable tribes, religions, races and nations. Whatever shape the landmasses take next I just hope and pray that by then, MANKIND has learnt to live in Love and Harmony!