In the last post, I had shared the description of our Universe and the TWO different types of Creations. For easy understanding of the descriptions from our Scriptures, we'll now take each topic individually beginning with our Galaxy, the Milky Way. As you are perhaps aware, ours is a Spiral Galaxy containing a Galactic Center, and various arms radiating outwards from it, in a spiral fashion. 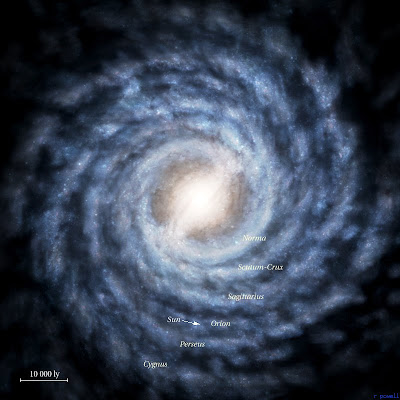 As mentioned earlier, Puranic literature is full of Astronomical details and our Galaxy is quite vividly detailed in {Chapter 23, Canto 5 of the Bhagvat Puraan}.

When I went through the descriptions, I was pleasantly surprised to know that the Rishis of yore have described our galaxy EXACTLY the way it is described now by modern Astronomers!! Bhagavatam compares it with the Kundalini Chakra, the energy source seated at the base of Human Spine like a coiled serpent. As a person's Yogic Powers advance, the Kundalini Energy moves upwards from one Chakra to another ultimately leading the Yogi to complete Enlightenment just as was achieved by Gautam Buddha.


Kundalini rising through the Chakras 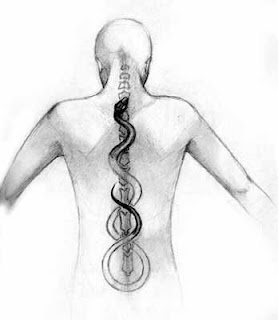 This celestial creature forming our Galaxy, is called Shishumar and is supposed to rest with its body wound around itself in a right-handed coil with the center formed by its tail end.

To the students of Science, this shape may be familiar as that of the Benzene Ring, which resembles a Snake biting its own tail!! Incidentally the symbol is also known by the Greeks as Ouroboros and by Chinese as the Dragon representing the never-ending cycle of Life and Death, the different Seasons, Time etc. 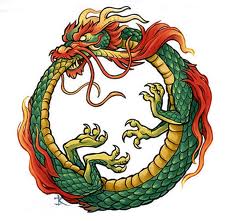 Scriptural description of the Galaxy

The Bhagvatam gives complete details of the various Lokas of the galaxy giving precise LOCATIONS of the various divine and semi-divine denizens of our Galaxy! Let us see what these locations are and try to find out a useful address or two from the descriptions ;o)

The Galactic Center, is the tail-end of the coiled serpent and is supposed to be a seat of Immense Power and Energy. According to the Bhagavatam, this Galactic Center is formed by the Dhruva Loka.

It is important to note that according to modern Astronomy, Galactic Center is made up of very large mass and density which scientists believe to be a Supermassive Black Hole. Black Holes are the evolutionary end-point of MASSIVE stars and pack within themselves the power of thousands of Nuclear bombs combined!


Now,  Dhruva as we know is the Pole Star and according to Bhagavatam, it is supposed to be situated right at the CENTER of our Galaxy. At present, the Northern pole star is Polaris, which lies close to the Celestial North Pole, and is visible at the end of the constellation Ursa Minor (Little Dipper). However, after researching its location, I found that this particular Star does not lie as far as the Center of the Galaxy and it dampened my excitement a bit :o( 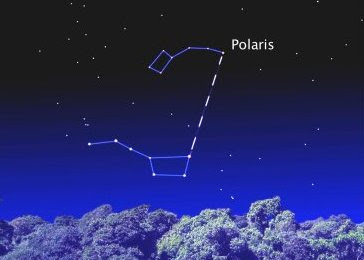 But, as I kept trying to find out more, I came across a phenomenon known as the Precession of Equinoxes. Simply put, it states that the role of the North Star PASSES from one star to another. This means that Other stars have occupied the position of the Pole Star before now!

Precession of the Equinoxes is slow, taking about 25,770 years to complete a cycle,  hence a single star typically holds that title for many CENTURIES, and since Hindu history measures time in billions of years, One of these stars could have been located in the vicinity of the Galactic Center at some point in our Ancient History!!

Pole Stars of Past and Future 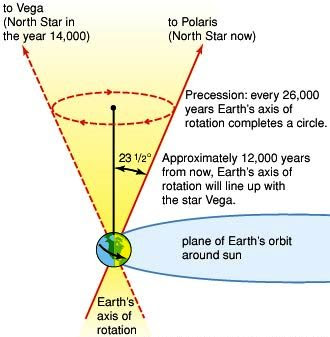 Identifying that Star is beyond my current research capacity, but I believe if we can find  it, it would help us date our Scriptures in a more authentic fashion as well as give us a proof that our civilization is INDEED very ancient.

The scripture further states that Dhruv-loka is supposed to be the Supreme Seat of Lord Vishnu in the Mortal Realm where He reclines on the Divine Serpent Sheshnaag accompanied by Goddess Lakshmi in the Ocean-of-Milk called Ksheer-Sagar. 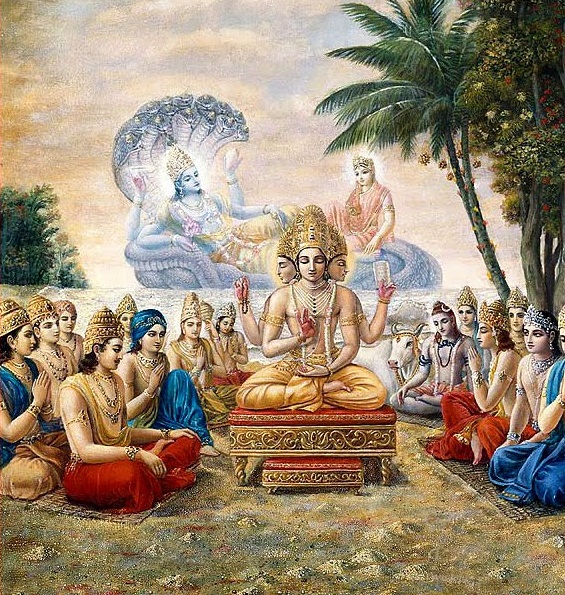 Now, Black Holes have always been conjectured to be portals between different Universes, sort of like Gateways to different dimensions. This makes me believe that our Supermassive-Galactic-Center-Black-Hole can fit the precondition of being the Abode of Lord Vishnu amazingly well, as it would connect Him with the Spiritual Realm outside as well as the Material realm contained within this Universe!


Moving on from the Galactic Center

Near the central abode of Dhruva resides Prajâpati, worshiped  by the demigods Agni, Indra and Dharma near the tail and the Holy Saptarishi Mandal at its waist.


The back of Shishumar is formed by stars collectively called Ajavithi and its belly is formed by the Sacred Ganges reverently known as the Akash Ganga.

If you look at the clear night sky, you'll observe a faint band of light stretching across the darkness, either through the middle or near the horizon which is considered it the symbolic representation of the Descent of Heavenly Ganges to the Mortal Realm of Earth. 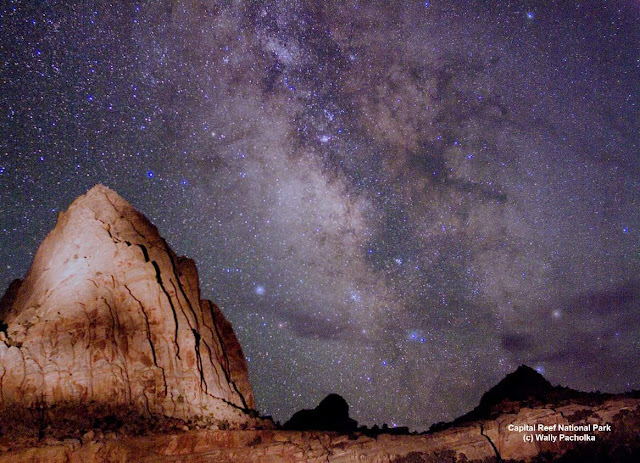 The planet Mars forms its face; Saturn forms its organ of generation; Brihaspati forms the hump on the shoulders while Surya - The Lord of the planets, (which I have taken as the reference point for the Labelled image of Shishumar below) forms its breast.

The Supreme Lord Narayan remains seated in its heart and the Moon is situated in its mind. The two Ashvins form either sides of its chest; Ushana or Venus forms its navel; Mercury is its Prana; Rahu is the neck and Ketu is all over its body in the form of different Comets.

The innumerable other stars we see are the numerous pores of its body. I have tried to label the image of our Galaxy according to the descriptions I have shared in this post. Please find below the Image that has resulted from this exercise. 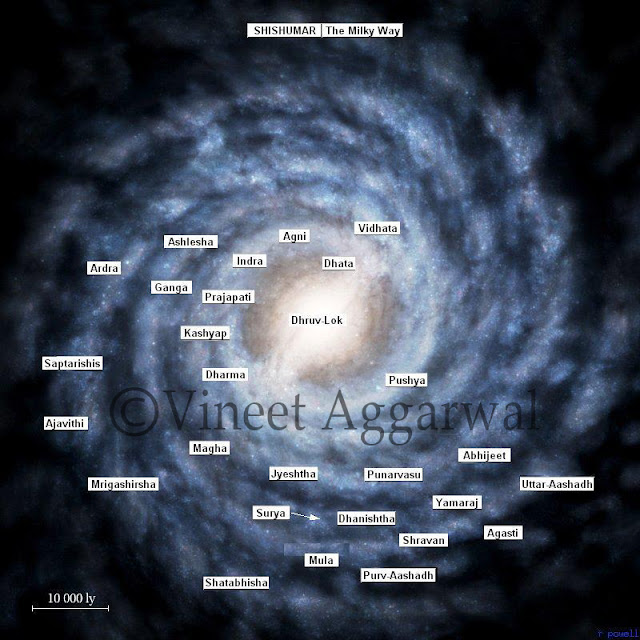 What is astonishing for me is that without access to any form of modern technology like the Hubble Space Telescope and its like, the Rishis of Yore could still fathom the extent and shape of our Galaxy in such a detailed fashion!

It was only in 1610, that Galileo used the first telescope and determined that Milky Way is formed of billions of dim stars that surround us. Before that, for centuries the astronomers had struggled with the basic questions about this band of light in the sky which were difficult to answer because of several reasons.

However, the 20th century brought great advancement in telescope technology and large Optical, Radio, Infrared, and X-ray telescopes allowed Astronomers to peer through the cosmic dust and look further into space. With these tools, they could piece together the puzzle of our Galaxy's shape but the point to be emphasized here is that all this became apparent only after the 20th Century! 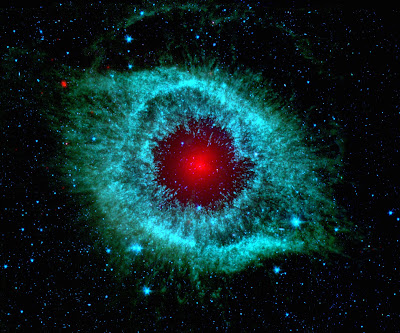 Yet, surprisingly, ancient Vedic rishis had not only described the shape of the Galaxy, they had also identified a huge POWER SOURCE at its Center; given descriptions of most of its major STAR SYSTEMS; as well as defined the relative positions of different Lokas in our  ever-expanding Universe!!

Whether it was due to their Superhuman Yogic Powers, or a result of direct observation (Space Travel?!?), I do not know. But, I hope this post opens the eyes of  my readers to a brand new perception of these religious texts and would encourage them to analyze our traditional culture and beliefs with a more open and scientific approach.

I will describe the various Lokas mentioned above in more detail in subsequent postsand will try to guide you through the structure of the Universe as per ancient Hindu Science. May Lord Vishnu guide me through this journey that I have embarked upon and help me bring hidden truths from our ancient scriptures to fore. 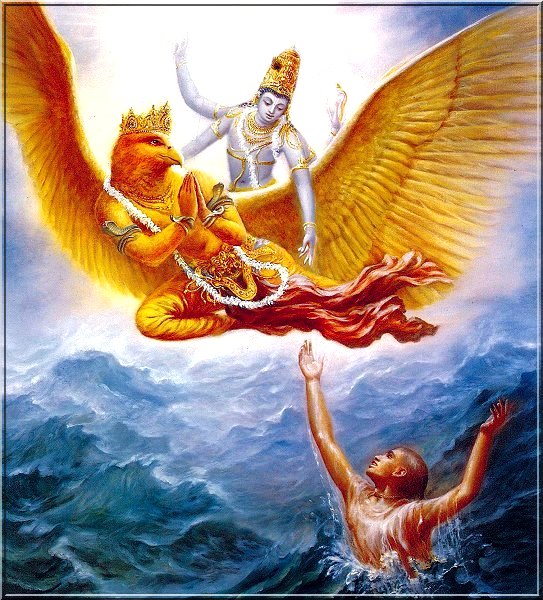 It is only fitting that I end the post with the traditional prayer to Supreme Lord Vishnu residing in this Coiled Galaxy Shishumar and also pay my obeisance to the Ancients who were able to decipher its structure on the basis of their Yogic powers..

Thou art the Substratum of all Luminaries,
Thou Createst and Destroyest all,
The Lord of all Celestials,
We meditate fully on Thee,

Planets, Galaxies and Stars are Thy body,
Divinity is established in Thee alone,
Thou art Âdipurush, the Foremost of all Beings,
All sins are destroyed by remembering Thee.