As each grain of Time is destroyed,
The next comes along and brings with it either Creation or Destruction.
This is the Dance of Shiva.

The eternal cycle of Life and Death; Birth and Re-birth; Formation and Dissolution is called the Kaal-chakra or the 'Wheel of Time'.

Puraanic genealogies take us back into the mists of time when Human-beings were first trying to settle down on Earth and make it their Home. The Age of Kali (Kaliyug) is astrologically believed to have commenced on 20th February 3102 BCE and consequently, we are currently in the 5114th year of this Era.

The Wheel of Time 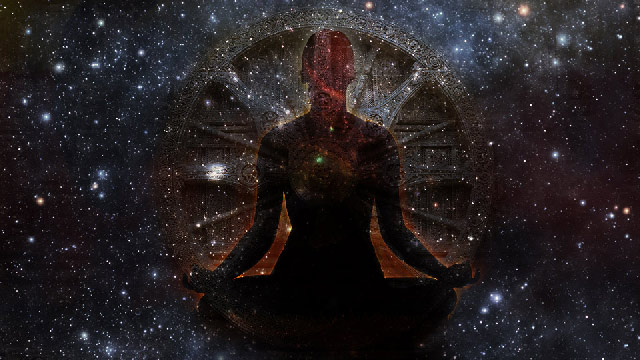 How did the ancients really perceive their world? Were they also as bewildered by these mind-boggling numbers as we are today? Or did they accept it nonchalantly and went back to their daily chores with a shrug.

The Indian calendar is ingeniously based on BOTH the Sun and Moon; it uses a solar year but divides it into 12 lunar months! In this calendar, seasons follow the Sun; months follow the Moon; and days follow both. To help the lunar months coincide with the solar year, the practice of inserting an extra month, called the Adhik Maas, arose which is inserted every 30 months since 60 months = 62 months.

Lunar days in the Indian calendar are called Tithis. They are calculated using the difference of the longitudinal angle between the position of the sun and moon. Because of this, the tithi may or may not have changed by the time the day has changed and this is why sometimes a tithi is omitted, and at others, two consecutive days share the same.

Tithis or Days in a Lunar Calendar 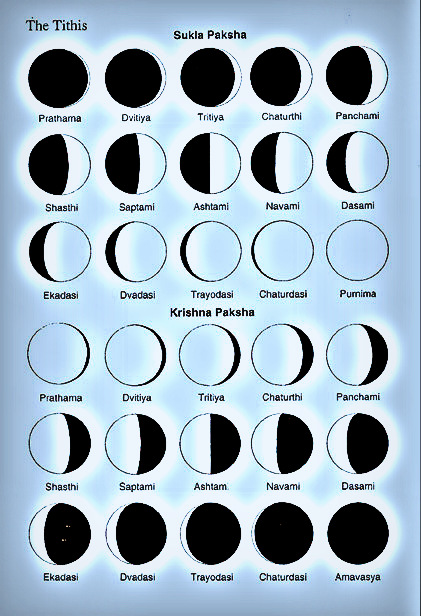 Astrologically, one of the oldest Calendars followed in Hinduism, is the Saptarishi calendar which begins from 6676 BCE (earlier referred to as BC). This version was in use in northern India from at least the 4th century BCE, as witnessed by the statements of Greek and Roman writers.

Another Indian calendar is known as the Vikram Era, or the Vikram Samvat, which began in 57 BCE. This calendar derives its name from the original king Vikramaditya of Ujjain and the date is supposed to mark the victory of the king over the Shakas, who had invaded Ujjain. Another calenad which is the Official Indian calendar now is known as the Saka Calendar and starts in 78 CE.


Measurement of Time in Hinduism

The authenticity and veracity of these dates will be dealt with subsequently, but for now let us try to understand the basic units of measurement used in ancient India. These units are based on the method of calculation known as Kaal-ganana.

According to the principles of Indian time measurement, the smallest unit of measurement of Time is the involuntary time taken to drop one's eyelid or the Blink of an Eye. It is remarkable that the ancients chose such a mode of measurement because this time is Constant for all living individuals hence does not depend on any Variables!
This 24 hour period is also divided into an overlapping division called the 'Praher' or 'Paher'. Each 12 hour period has 4 Prahers each, thereby dividing one rotation of Earth into 8 equal parts. 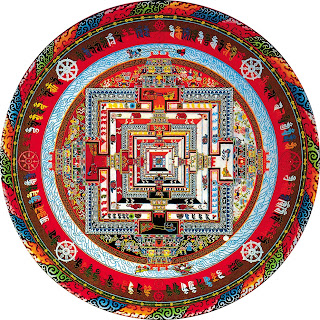 In one of the higher planets called Pitralok, one fortnight of humans corresponds to one day and a similar time period counts as their night. Therefore, the Bright fortnight forms the Day of the Pitras and the Dark one forms the Night.

The six months when Sun is in the Northern Hemisphere are called the Uttarayan and the corresponding six in the lower hemisphere form the Dakshinayan. This bright northern jurney of Sun forms One day of the Devas and the six human month Southern journey forms their Night. Thus, for the demigods, One human year is equivalent to One Day-Night period.

Lord Brahma's day and night are each known as a Kalpa and Brahma lives for a Hundred such Years. One day in the life of Brahma thus comes to be close to4.32 Billion human years!

In the continuum called Mahayuga, each successive Yuga is lesser in duration than its predecessor by 25%. Also, at the beginning and end of each Yuga, there exists a Sandhya which forms 10% of the duration of that Yuga. These are the durations of the respective Yugas: 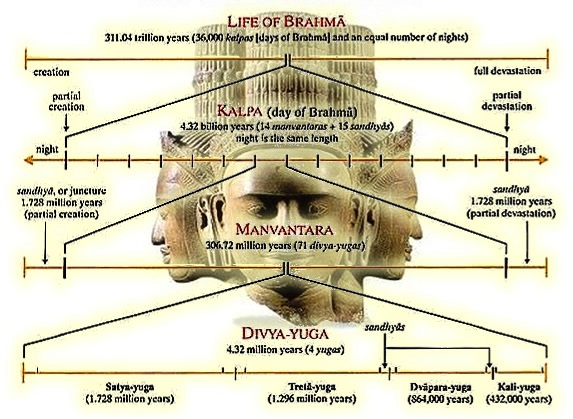 When these cycles of time have repeated themselves for a 100 years of Brahma, it is time for the creator-god to leave his mortal body. At the end of this Time, there is dissolution of the entire Creation and all living as well as non-living matter is absorbed unto itself to once again Begin at the Beginning.